Distance from the centre of Kingsbridge: 10 miles 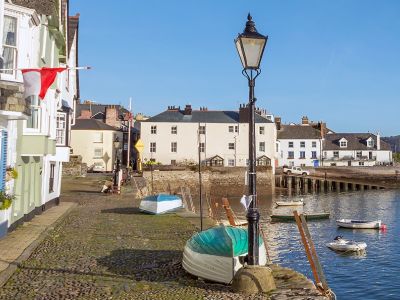 August 1620 saw the Pilgrim Fathers, in their two ships, The Mayflower and The Speedwell depart from Bayards Cove in Dartmouth for the New World America. Unfortunately, the Speedwell started sinking 300 miles off Lands End and they all returned to Plymouth. the Mayflower continued the journey alone to America and created history.

Dartmouth is one of the eleven towns participating in the National Mayflower Partnership and, throughout the 12 months from Thanksgiving November 2019, will be commemorating the 400 year anniversary of the sailing of the Mayflower with a series of exciting events. These events will involve the whole town and we hope will leave a lasting legacy well beyond 2020.

An original play with songs and narrative centering on the Mayflower’s stay in Dartmouth.at Flavel Arts Centre. Written by Derek Parsons and Keith Myerson, this is a very special production to be performed and sung by local people in neighbouring venues during 2020.

A concert by The South West Chamber Choir to be held in St Saviour’s Church in November. The programme (under the title ‘Over the Restless Sea’) will include Clive Jenkins’ Mayflower Pilgrims cantata, which is for baritone soloist and choir, and uses words from William Bradford’s contemporary diary of the voyage and an edition of the psalms published in 1612, as well as two nonconformist hymns. Also planned is Stanford’s Songs of the Sea. The programme will include the anthem written by Ed Welch for the Dartmouth Mayflower 400 events, as well as other choral music associated with the sea.